If you’d like to add a photo to your story, please email it to us.

See our shared stories below. 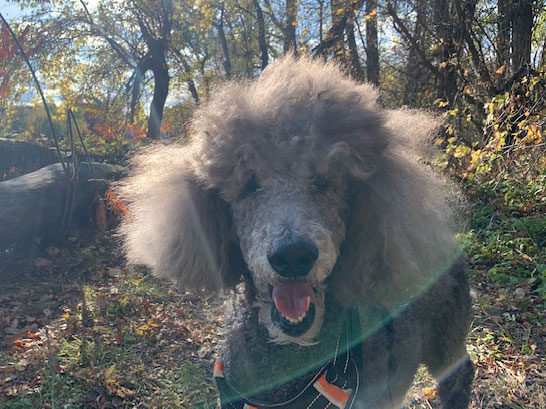 My 12 year old boy Beppo, a gorgeous silver standard poodle, was diagnosed with a very rare form of pancreatic cancer in February. He became gravely ill in December, exhibiting various strange but serious symptoms that puzzled three vets from two different states. We were finally seen by the kindest doctors from Peak and he was properly diagnosed. After two major surgeries and countless trips to the vets, Beppo is finally on the road of recovery. I reached out to Emma and applied for their assistance and I quickly received a response from Tina. Not only the foundation helped me out financially, a kind hearted stranger who read about Beppo on Emma’s website also donated. Shout out to Sima Brieterman!

Emma has been so wonderful, I will definitely make donations once my finance is stable. 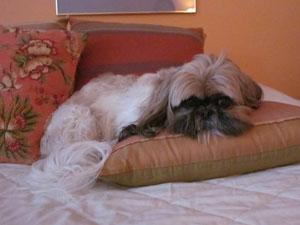 Mattie was a hardy little girl. She bounded into my orbit as a runaway in Richmond, Vermont in the winter. A kind man took her to the local vet’s office where she stayed while waiting for seven days for someone to answer the newspaper announcement. I called and was told the “warden” was coming for her that very morning to take her to the humane society. I called them to have them tell me when she got there and ran right over when she arrived. What a mess she was – mats and all – hence her name. After being spayed and shaved I could take her home. She adjusted right away and became my little partner and companion for 15 years. Emma’s helped out when she had thyroid cancer. Then she had her spleen and gall bladder removed. A year or so later the cancer spread to her lung but she lived two years beyond the doctor’s prognosis. Soon she began slowing down, no longer waited outside the shower for me or bounded up the steps to bed or played with her squirrel. It was finally not fun for her and the doc said we have talked about this and she slipped peacefully across the rainbow bridge. Dear sweet Mattie. There will never be another like her. Bossy, an alpha, a clown, smart and loyal. I miss her so. 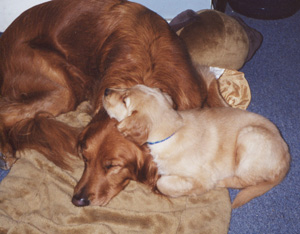 Emma was the sweetest of girls. Her older brother Gabriel came to live with me first, and like her he was a sweet soul who knew instinctually how his humans were feeling and when they needed a kiss or cuddle. In 2004, he was diagnosed with lung cancer. A trip to Tufts in Boston confirmed that nothing could be done but to make him comfortable. His lungs were shot through with cancer, and he was helped to the bridge a week later when he was too weak to function. I told Emma, “You have to stay with me longer than your brother did. I can’t bear to lose you too!” Last October she turned 13, but she seemed healthy, had no arthritis, and could jump in and out of the car with no problem. Slowly that started to change, but I thought it was just old age so bought her a ramp to get into the car. This month she started to eat more deliberately, chewing slowly, and I thought perhaps her teeth were bothering her. I brought her to the vet on March 11 so that she could get checked out. She was declared in perfect health, but three days later she wouldn’t eat all of her food, so I took her back. A blood test showed severe anemia, and I was referred to SAVES emergency vet. There the vet found a lump in her abdomen that was confirmed by x-ray to be a nectarine-sized mass. She was given a blood transfusion in an attempt to buy her–and me–more time, but it was too late. The next day I lay beside her and breathed each breath with her until she wasn’t breathing anymore. My little Emma Jeannie Beanie, my Golden girl,has gone off to meet her brother on the other side of Rainbow Bridge. I am devastated. 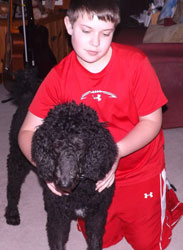 we found our beutiful standard poodle abby in a petshop we asked to take her out immediatly she came to us and sucked up to my dad right then and there we knew she was the one.one night we were petting her and we knowtest a lump on the side of her neck.my dad brought her to the vet when he got home he told us our abby had canine lymphoma. at dinner we decided we were going to do whatever we could. we brought her to peak vetrinary hospital. we decided to use chemo it worked. she was only in remmision 3 months. we sighed we couldnt afford any more treatment so we asked emmas foundation they said yes we will help abby.we brought her to visit tina and ron. finally the dr knapik from peak.said we are out of chemo that will work. we spent a week with our angel. then on a thursday when i got home she wasnt there the wonderful staff at peak helped my abby pass across the rainbow bridge. i am sad she was only 7. i want to thank tina,ron,bethany from peak,and dr knapik,and kim.they treated her specially. “i love you bab” 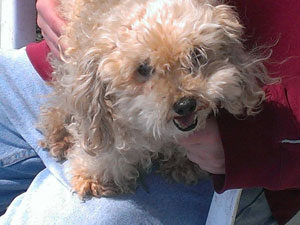 Please meet Percy… this little guy was diagnosed with a tumor in his left adrenal gland… his mom and dad applied to Emma’s Foundation for assistance. They stopped by today to meet us and to drop off paperwork… Unfortunately Percy’s struggle was short… he passed this afternoon at BEVS in Williston. I would like to share what Josh and Lyn said made their little Percy so special; “Our dog Percy is special because he is our baby. Percy was adopted 3 years ago from a rescue. Percy loves belly rubs, booty scratches, walks, swimming with his life vest, playing in the sun and in the snow, riding in the kayak and the paddle boat, and rides in the car. He just enjoys being with us all the time. Percy does not like playing with toys. He loves playing with humans, which means you run and he comes and gets you and then you have to pick him up and lavish him with love. Percy is family and family is what matters most. I’m not sure how to say how much we love Percy and need to be able to help him to get healthy so that he can be home with us doing all the stuff that he loves to do”… RIP sweet Percy, you will be missed tremendously, “heaven is now a bit brighter”.

I had my boston terrier mix for 11 happy years. In August 2013 I noticed lumps in her neck, the vet confirmed my worst fear. After she was diagnosed with Lymphoma, my already spoiled baby became absolutely rotten. She fought a good fight but we caught the cancer too late she passed September 30, 2013. Tiny was my happiness, my angel, my best friend and child. I still cry everyday when I come home and don’t find her waiting on me by the big oak tree. She is missed more and more everyday but I know she is waiting on me in heaven by the big oak tree and knowing that comforts me. “I love you so much wee, I always will and never will I ever try and replace my angel. I know Grandpa will take good care of you until the day I get to see you again. Make sure to sun that belly everyday and play until your heart is content. Until the day we meet again, I will miss you every year, month, week, day, hour and minute.”

Ivory was my first best friend. He was a happy go lucky Yellow Lab that absolutely loved everyone he met. At age 7 I found a softball sized lump around his throat. I immediately called the vet and brought him in. He was diagnosed with Lymphoma. He stuck it out for 2 years after his diagnosis. Still add happy as can be. I lost him in April of 2012. I miss him everyday. I’m thankful I got 9 years with his happy, spunky, playful spirit.

My best friend Boshie passed away in april.She was a Rotweiller.I miss her from my heart. I ment her about 3 years ago at a flower a day. She belonged to my friend Kim.AT first i was afraid of Bosh but then i grew to love her over the years. I will love and miss you forever. 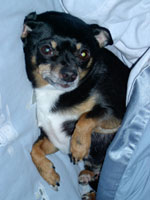 Our chihuahua, Taco, came to us when he was 1 yrs old. As the years went by we grew to love him as our baby, our friend, our family. When he turned 10, he was diagnosed with bone cancer, and we almost lost him. He was a brave boy and fought the cancer for 3 more years. The vet called him ‘Mr. Taco her miracle dog’. This January he lost his fight to the cancer. It was a hard decision to let him go, but we had to do what was best for him. Now he has crossed the rainbow bridge, “until we see you again little boy. We love you and miss you!”